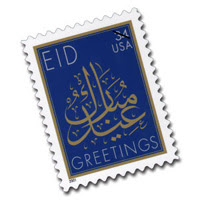 On September 1st, 2001, the US Postal Service issued a postage stamp commemorating the Islamic festivals of Eid al Fitr and Eid ul Adha. Ten days later, the twin towers fell. An enormous controversy arose, with a vocal xenophobic campaign arising to demand that the stamp be withdrawn and replaced with the images of the twin towers, but the stamp was saved, most notably because of the vocal and public support of the Bush Administration, especially President George Bush and House Speaker Dennis Hastert. And ironically, the stamp was indeed discontinued two years later by the USPS, but not for any reasons of domestic pressure from the jafi lobby, but simple apathy. It is a tale worth retelling every Ramadan.

Very few people, Muslim or otherwise, are even aware of the existence of the Eid stamp. visually, the stamp is iconic, simply beautiful. From the White House website, here is a description of the artistic process in its creation: 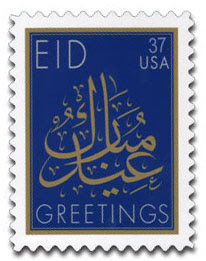 The Eid stamp, designed by Zakariya of Arlington, Va., features the Arabic phrase "Eid mubarak" in gold calligraphy on a blue background. English text on the stamps reads "EID GREETINGS."

Employing traditional methods and instruments to create this design, Zakariya chose a script known in Arabic as "thuluth" and in Turkish as "sulus." He describes it as "the choice script for a complex composition due to its open proportions and sense of balance." He used homemade black ink, and his pens were crafted from seasoned reeds from the Near East and Japanese bamboo from Hawaii. The paper was specially prepared with a coating of starch and three coats of alum and egg-white varnish, then burnished with an agate stone and aged for more than a year.

This beautiful, elegant work of art, intended to commemorate both the end of the Ramadan and the festival in which muslims honor the patriarch of all three major religions, came under immediate and vicious attack, after the attacks of September 11th. This was in hindsight rather inevitable, but it was obscene nevertheless.

The crux of the argument against the stamp was made in an editorial by Paul Weyrich, entitled "Why a tiny stamp deserves a huge backlash." Weyrich writes,

We are not at war with a gang of terrorists. Al Qaeda is not the Jesse James gang with Arabic surnames. It is not even that we are at war with Islam. Rather, Islam is at war against us.

The answer is no on both counts. Actually, a flag stamp issued by our government featuring Nazi Germany's swastika or the Soviet Union's hammer and sickle would have been unthinkable.

That is why we raised the issue of the Eid. We wanted to encourage debate about what Islam really stands for and why we have good reason not to honor the religion. As a nation, we still need to have that debate.

This is very hard for most Americans to understand, but it needs to be said over and over again.

Islam at its core is hostile to the West and the values that comprise the Judeo-Christian tradition, including the emphasis on tolerance and peace that many in the establishment are now so eager to promote as being the true values of Islam.

There are many Muslims who are peaceful, but the fact is that the core of the religion itself is not peaceful.

Weyrich and his organization, Quixotically named the Free Congress Foundation, submitted a letter to various government officials making their case, including House Speaker Dennis Hastert. Of course, Muslim-American organizations responded, making the fairly obvious point that 9-11 had absolutely nothing to do with muslims, or Islam, or the stamp:

"I am writing to suggest that the current stamps be withdrawn, to be overprinted with the image of the Twin Towers and then reissued," foundation President Paul M. Weyrich wrote in letters to House Speaker J. Dennis Hastert (R-Ill.), Majority Leader Richard K. Armey (R-Tex.) and Majority Whip Tom DeLay (R-Tex.).

"I have no doubt a majority of Americans would find the altered stamps a more appropriate commemoration of Islam than the current celebratory version," he said.

But anyone who looks at the Arabic script on the Eid stamp and equates that with the terrorist attacks is "really playing into the hands of the terrorists," said Aly R. Abuzaakouk, executive director of the Washington-based American Muslim Council.

It is incumbent upon muslim-americans to recognize however that the far more devastatingly effective response to the jafi zealots like Weyrich was not by CAIR or the American Muslim Council, but simply this: 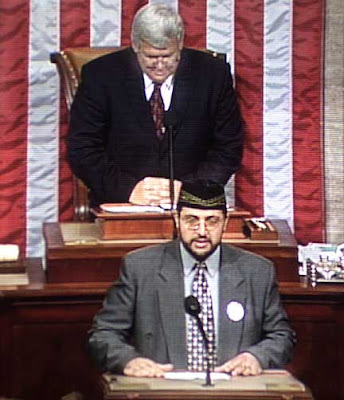 This festival marks the end of the month-long fast of Ramadan, the holiest period of the Islamic year. Eid al-Fitr is a time to give thanks to God for the blessings of renewed faith, to perform acts of charity, and to share traditional food and good wishes with family and friends.

Islam is a religion that inspires its followers to lead lives based on justice, compassion, and personal responsibility.

During this joyful season, I encourage people of all faiths to reflect on our shared values: love of family, gratitude to God, a commitment to religious freedom, and respect for the diversity that adds to our Nation's strength. By working together to advance peace and mutual understanding, we help build a future of promise and compassion for all.

Laura joins me in sending our best wishes for a joyous celebration.

It's also worth mentioning that the US State Department has issued an entire booklet entitled Muslim Life in America, which documents the way in which Muslims have moved into the American mainstream, and integrated with their communities.

It's also worth mentioning that President George Bush has, on numerous occasions, expressed admiration for the faith of Islam, and affirmed the place of muslim Americans as valued members of our society. This is why, despite my often fervent and heated critiques of the Bush Administration's policies both at home and abroad, I cannot and never will hate George Bush.

And yet, in the end, the Eid stamp was indeed discontinued after 2002. The reason was straightforward; like any other special issue stamp, the decision was made based on the result of sales. And the Eid stamp simply did not perform well enough to justify its continued printing. It's probably safe to assume that the majority of muslims in America never even realized that there was an Eid stamp; if anything the controversy by Weyrich et al probably boosted sales, albeit briefly. If you will pardon the expression, the stamp simply failed to stick.

First issued in 2001, the stamp commemorates the two most important festivals in the Islamic calendar: Eid al-Fitr and Eid al-Adha. On these days, Muslims wish each other "eid mubarak," the phrase featured in calligraphy on the stamp, which translates as "blessed festival" or "may your religious holiday be blessed."
[...]
The Postal Service produced 40 million 41-cent Eid stamps in sheets of 20 that are available for purchase at local Post Offices, online at www.usps.com/shop, or by calling 800-STAMP-24 on Sept. 28.

I urge my fellow muslims and non-muslim friends alike to show your support for this beautiful stamp, and the expression of happiness and celebration that it represents, by making a point of buying Eid stamps this year. You can order them directly online.

Bush, as much as I might disagree with his policies and the legacy of his administration, is a well-meaning guy. At least he sees Muslim-Americans as Americans.