I am pleased to announce the launch of the Talk Islam FAQ project. In a nutshell, TalkIslam is a Frequently Asked Questions database about Islam and muslims, loosely inspired after the TalkOrigins FAQ which is such an invaluable resource against Creationist arguments. The idea is that we address common questions (and tropes) about Islam preemptively and do so in an organized fashion so that anyone involved in a debate about Islam may simply refer to TalkIslam FAQ rather than reinvent the wheel.

The site is organized as follows. I've integrated BBpress (a bulletin board system) and Wordpress so that talkislam.info main page shows you the latest forum topics on top and the blog posts below. The forum is the FAQ; if you go to talkislam.info/faq you will see the forum immediately. User accounts on the blog also work on the forum and vice versa. The forum format allows us to define and nest topics of interest and then devote a thread to a given question for ongoing editing and refinement over time.

This project is analogous to a wiki in that it invites colloboration between all of us to a greater good. The advantage of the forum format is that we can refine and strengthen the answers over time, evolving the site to become more and more useful. I believe that the depth of talent in the Islamsphere is such that this project can attain a very high informational value in a very short time, even if all we do is recycle old posts from our blogs at the outset.

The liberal sphere is outraged that JetBlue airlines has cowed to Bill O'Reilly's charaterization of DailyKos as a "hateful website" and withdrawn it's sponsorship of theYearlyKos conference. There are no less than three recommended diaries at DailyKos alone right now expressing anger, shock, and betrayal. However, this is not the first time that JetBlue has behaved badly. JetBlue has a history of reactionary prejudice against muslims and pakistanis. 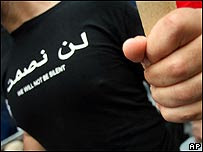 Almost everyone in the blogsphere should remember Raed Jarrar - the Iraqi blogger of Raed in the Middle fame, whose dispatches from Baghdad in the runup to war kept millions of people on the edge of their seats in anxiety for his safety. Raed became an activist after the war, moved to the US, and has made many trips to Iraq and Jordan meeting with Iraqi ministers and secular, liberal human rights NGOs. On a return trip from aroad, he had an encounter with JetBlue personnel at JFK because he was wearing a t-shirt that said in Arabic script on the front, "we will not be silent". In his own words,

At around 8:30, two men approached me while I was checking my phone. One of them asked me if I had a minute and he showed me his badge, I said: "sure". We walked some few steps and stood in front of the boarding counter where I found out that they were accompanied by another person, a woman from Jet Blue.

One of the two men who approached me first, Inspector Harris, asked for my id card and boarding pass. I gave him my boarding pass and driver's license. He said "people are feeling offended because of your t-shirt". I looked at my t-shirt: I was wearing my shirt which states in both Arabic and English "we will not be silent". You can take a look at it in this picture taken during our Jordan meetings with Iraqi MPs. I said "I am very sorry if I offended anyone, I didnt know that this t-shirt will be offensive". He asked me if I had any other T-shirts to put on, and I told him that I had checked in all of my bags and I asked him "why do you want me to take off my t-shirt? Isn't it my constitutional right to express myself in this way?" The second man in a greenish suit interfered and said "people here in the US don't understand these things about constitutional rights". So I answered him "I live in the US, and I understand it is my right to wear this t-shirt".

Then I once again asked the three of them : "How come you are asking me to change my t-shirt? Isn't this my constitutional right to wear it? I am ready to change it if you tell me why I should. Do you have an order against Arabic t-shirts? Is there such a law against Arabic script?" so inspector Harris answered "you can't wear a t-shirt with Arabic script and come to an airport. It is like wearing a t-shirt that reads "I am a robber" and going to a bank". I said "but the message on my t-shirt is not offensive, it just says "we will not be silent". I got this t-shirt from Washington DC. There are more than a 1000 t-shirts printed with the same slogan, you can google them or email them at wewillnotbesilent@gmail.com . It is printed in many other languages: Arabic, Farsi, Spanish, English, etc." Inspector Harris said: "We cant make sure that your t-shirt means we will not be silent, we don't have a translator. Maybe it means something else". I said: "But as you can see, the statement is in both Arabic and English". He said "maybe it is not the same message". So based on the fact that Jet Blue doesn't have a translator, anything in Arabic is suspicious because maybe it'll mean something bad!

inspector Harris said: "You don't have to take of your t-shirt, just put it on inside-out". I refused to put on my shirt inside-out. So the woman interfered and said "let's reach a compromise. I will buy you a new t-shirt and you can put it on on top of this one". I said "I want to keep this t-shirt on". Both inspector Harris and Mr. Harmon said "No, we can't let you get on that airplane with your t-shirt". I said "I am ready to put on another t-shirt if you tell me what is the law that requires such a thing. I want to talk to your supervisor". Inspector Harris said "You don't have to talk to anyone. Many people called and complained about your t-shirt. Jetblue customers were calling before you reached the checkpoint, and costumers called when you were waiting here in the boarding area".

it was then that I realized that my t-shirt was the reason why I had been taken to the secondary checking.

I asked the four people again to let me talk to any supervisor, and they refused.

The Jet Blue woman was asking me again to end this problem by just putting on a new t-shirt, and I felt threatened by Mr. Harmon's remarks as in "Let's end this the nice way". Taking in consideration what happens to other Arabs and Muslims in US airports, and realizing that I will miss my flight unless I covered the Arabic script on my t-shirt as I was told by the four agents, I asked the Jet Blue woman to buy me a t-shirt and I said "I don't want to miss my flight."

She asked, what kind of t-shirts do you like. Should I get you an "I heart new york t-shirt?". So Mr. Harmon said "No, we shouldn't ask him to go from one extreme to another". I asked mr. harmon why does he assume I hate new york if I had some Arabic script on my t-shirt, but he didn't answer.

Incidentally, after the incident, other members of Raed's activist organization made a point of wearing the same shirts and flying on ActBlue. None were harassed in any way. Look at the pictures in the PDF report of their experiment and see if you can guess why.

It doesn't end there. JetBlue has been accused of religious discrimination, firing a Jewish man for his inability to work on Saturdays. And a Pakistani-born American citizen and trained commercial pilot, Faisal Baug, applied for and received a job at JetBlue. owever, JetBlue then rescinded the job offer, because his birth country of origin represented a "security risk" :

Faisal Baig, a U.S. citizen who was raised in Yonkers, N.Y., claims in the suit that an airline manager told him in March that he was a "security risk."

The manager answered, "Yes, and JetBlue considers you a security risk," according to the suit.

Baig claims he was offered the job in February and had already received a ticket to attend the airline's training school in Orlando, Fla. The 40-year-old, a Muslim, had previously flown for Independence Air for nearly six years.

"I was devastated," he said. "I've been living in this country since I was 7, and now somebody's telling me I'm not a good American."

Just for kicks, Sepia Mutiny blog decided to see what Free Republic thought of the Faisal Baig affair, Oh, Iago, try not to keel over dead from not-surprise! As far as I am aware the Baug case is still pending litigation.

JetBlue seems to have a systematic profiling policy, which relies on crude stereotypical appearances rather than intelligent analysis of the sort successfully used by El Al, the national airline of Israel. Even this right winger, who self-describes himself as having "Mediterranean" appearance, got caught in the web; though he was happy about it. But anecdotal reports from throughout the south asian community lend credence to the assertion that JetBlue doesn't want you flying while brown.

So, I don't feel betrayed by JetBlue and frankly am glad that the incident with YearlyKos and O'Reilly served to finally wake the progressive community to the truth about this company. I empathize with Kos's praise of the service and convenience that JetBlue provides him on his travels, but flying JetBlue only serves to reward the company for its prejudgement of muslims and asians as terrorist threats.

Perhaps we should call it JetRed. At any rate, I won't ever fly JetBlue and I hope others come to the same conclusion.

FYI, Raed's shirt can be ordered in Arabic, Farsi, Spanish, English, German, or Hebrew with Arabic script, see some more photos here. Their antiwar group A Critical Voice will send you the shirt for free but they request a donation via paypal or check of whatever amount you think is best.
Posted by Aziz P. at 7/21/2007 07:46:00 AM

Email ThisBlogThis!Share to TwitterShare to FacebookShare to Pinterest
Labels: JetBlue

I don't read it as often as I should, but it's worth noting that Islamicate is an excellent blog. The author, Islamoyankee, is a Nizari Ismaili muslim which makes him as sort of blood cousin in faith to me. It's a great blog and I recommend it highly.
Posted by Aziz P. at 7/08/2007 02:02:00 PM

Email ThisBlogThis!Share to TwitterShare to FacebookShare to Pinterest
Labels: Islamsphere

...on Fox News's Your World With Neil Cavuto, National Review Online columnist Jerry Bowyer attacked Michael Moore's movie SiCKO and its positive portrayal of the health care in countries such as Britain and France. He argued that national health care systems are breeding grounds for terrorists because they are "bureaucratic." "I think the terrorists have shown over and over again ... they're very good at gaming the system with bureaucracies," said Bowyer.

as Steve Benen at the Wsshington Monthly notes, this is a developing conservative talking point. Recently at National Review Online, Ian Murray argued that your foreign-trained doctor might be an Al-Qaeda mole:

The socialization of medicine in the UK is responsible for a lot of problems. The importation of terrorists is just one of them.