Voting has begun for the 3rd Annual Brass Crescent Awards. Please visit BrassCrescent.org and vote for your favorite blogs and blog posts now!

The fall holiday season starts with the most important holiday in my opinion - Thanksgiving! What a concept - give thanks for the numerous bounties and blessings we have received.

It is unfortunate that today thanksgiving is corrupted by the shopping frenzy and all the other cunsumer related events. But the Holiday itself remains to me the most important of all.

We forget too many times to give thanks for all that we have. When you wake up tomorrow with family, friends, colleagues, loved ones or even if you are by yourself, ponder for a few minutes what do you have to give thanks for? When you gaze out the window on this crisp Thursday morning, think of the never ending bounties of nature that surrounds us. The fact that we give thanks for seeing the sun rise one more day. That we live in a time when the good can be made to great, when food is plenty for us and when even the very basics of life are taken for granted. Look around the table as you prepare to have the plentiful Thanksgiving meal and see the joy you see in the eyes of your family and friends, give thanks for having the blessings of such companionship, support and family. When you first have a taste of that sumptuous meal and drink the sweet drinks, give thanks for the endless bounties you have received everyday that has led to this very complete nourshing meal.

We owe a lot to this world and the bounties that have been given to us. We forget that if we tried to even count the blessings of what we have in our hands, we would spend a lifetime and not even put a dent on the list of thigs we should be thankful. All we have is a single day dedicated to reflecting on such bounties, spend one day focusing on thinking, "what do I have to give thanks to?"

It is said that those who will give thanks shall receive exponentially more. Sounds like a wonderful investment....so tomorrow hold your family, friends, colleagues and neighbors hands, feel the endless blessings you have received in the past year, gaze in their eyes and see the joy and give thanks!

Ali Eteraz has launched a new Scoop-based blogging platform for the Islamic blogsphere. The new site, called "eteraz.org: states of Islam" is essentially the same technology as powers DailyKos, complete with user diaries.

I will not be cross-posting content between my diary at Eteraz.org and this site. I have written an exclusive essay, a contemplation of the Israeli-Palestine conflict and what is needed for peace, for Eteraz.org and I hope that others will also make maximum effort to help make it into a shining example of the best the Islamsphere has to offer.

Shukran to Ali Eteraz for making this possible. Great things start small, but if you build and nuture your community, it will prosper indeed.
Posted by Aziz P. at 11/16/2006 08:19:00 AM 1 comment:

publicly-funded faith schools in the UK: some facts

In the UK, a breakdown of the number of faith schools run by:

addendum: according to the UK Secretary of Education, publicly-funded Muslim schools already seek a non-muslim pupil population of 20% and 25%. They fall short however because of bad PR image problems. (via Yahya Birt)
Posted by Aziz P. at 11/11/2006 11:54:00 PM No comments:

AltMuslim and City of Brass are pleased to announce the third annual Brass Crescent Awards for the muslim blogsphere!

The Awards will take place in two phases. First is the nominations phase, where readers nominate their favorite blogs in each of several categories. All submitted nominations will then be narrowed down to a maximum of five nominees per category, as selected by our judges. We will then have the final voting round on this site. The nominations phase begins today and will run until Friday, November 17, 2006.

Participating in the Brass Crescent Awards has never been easier. To nominate a blog or blog post, simply fill out the online form at BrassCrescent.org. The categories are as follows:

BEST BLOG: This category honors the most indispensable, muslim-authored blog there is. Period.

BEST NON-MUSLIM BLOG: Which blog written by a non-Muslim is most respectful of Islam and seeks genuine dialogue with Muslims?

BEST DESIGN: Which blog has the most aesthetically pleasing site design, appealing to the eye, evoking Islamic themes, and/or facilitating debate and discussion?

BEST POST OR SERIES: Which single post or group of posts in the Islamsphere was the most original and important, above all the others?

BEST IJTIHAD: What blog post provided the best rebuttal to arguments of extremist ideology, and in so doing expose how those who commit evil in the name of Islam are actually profaning the faith?

BEST FEMALE BLOG: The woman's voice in Islam is equal to the man's, and in the Islamsphere we seek to make sure the female perspective is highlighted and given its rightful due. Which muslim woman's blog has done the most to explore the role that women play within Islam and society?

BEST THINKER: Who is the most stimulating, insightful, and philosophically wise among us? This category is intended to highlight a blogger who may not post daily, but when they do post, they really make an impact.

MOST DESERVING OF WIDER RECOGNITION: Which blog is a true diamond in the rough, one that everyone should be reading but who most just haven't heard of (yet)?

BEST GROUP BLOG: Which multiple group blog in the Islamsphere has the best diversity of writers and the most interesting debate on Muslim issues?

BEST MIDDLE-EAST/ASIAN BLOGGER: The Islamsphere is truly a global phenomenon. In Iraq, despite the chaos and uncertainty, there is a sea change of free speech and expression, the vanguard of which are blogs. There are also bloggers in India, Pakistan, Afghanistan, Palestine, Jordan, and most other countries that host Muslims, all of whom have their own perspectives on faith, culture, and politics.

Please join us at BrassCrescent.org to vote for your favorite blogs. This is our chance to honor ourselves and strengthen our virtual community. Please help us publicize the Awards as well, by including one of the following icons on your site, just copy and paste the corresponding HTML below: 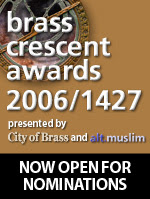 We hope you will join us in promoting and participating in the Brass Crescent Awards this year. More details about the Awards are at BrassCrescent.org.
Posted by Aziz P. at 11/06/2006 08:06:00 AM 1 comment:

comments on the veil

Razib talks about veils at Gene Expression and breaks his observations into five major points. I found that I had some commentary on each, and originally was going to leave the following as a comment there, but decided to post it here instead.

One of the guests, who wore a full face veil, basically implied that women who don't dress the way she does are sluts.

This is a fairly commonplace and reasonable attitude among conservative women (Christian, especially). To put the incidents where a muslim woman has her veil ripped off in context, imagine someone walking up to a Christian matron and tearing off her blouse. Imagine such a matron's reaction to someone wearing no blouse (a la Sue Ellen Mischke).

To be perceived as modest and not draw attention in the West doesn't necessitate taking up the niqab, or, frankly even the hijab. If one has an absolute scale of modesty this might not be so, but, if the concern is how others perceive you, then that is the reality

This is actually backwards. The concern - ostensibly - that drives wearing the veil among conservative muslim women is not how others perceive you. It is how you perceive yourself. It is a statement of value that the woman places upon her own body and how she defines her own modesty.

Whether you draw attention or not is irrelevant - of course you will draw attention in teh generic sense. But someone gawking at your niqab is someone who is not imagining you naked. And that is the key.

Wearing the veil is a statement, just like getting a lot of peircings, or tatoos, or dying your hair is a statement. If the goal is to be modest and keep a low profile, walking around in a full body veil is not doing that. That's just the reality.

the goal is modesty, but NOT "keeping a low profile". Modesty is a goal but it doesnt require copartmentalization away from society. In fact the goal of the modesty is to enable women to attain a "normal" profile in society without the baggage that abandonment of modesty entails.

This is an important point which needs to be reiterated: wearing a fully veil is an interpretation of Islam.

absolutely true! And yet I don't think anyone - even myself - has ever stated that so directly. It needed to be said, and I will say it from now on. Having said that would have really strengthened my Burka and Bikini essay from way back.

veiling was never really normal in any society that is like a typical Western society where women are independent and are out and about in the world.

I disagree rather strongly. Muslim women in various states of veil and niqab participate fully "out and about" in India, Pakistan, Turkey, Malaysia, Jordan, Dubai, ... and the United States.

A fascinating article of relevance btw is Karen Armstrong's observation about what her years in a nun's habit taught her about veiling. Highly recommended reading.
Posted by Aziz P. at 11/02/2006 03:53:00 PM 1 comment: