Shadi Hamid at eteraz.org writes that there is a difference in belief between muslims and christians about the inerrancy of the religious texts:

Muslims believe that the every word of the Quran is the literal, unaltered word of God. It is this fact which distinguishes Islam from the two other monotheistic religions. Post-enlightenment, the vast majority of Christians and Jews no longer believe in the inerrancy of their own scripture and this is seen as part of a natural, necessary progression.

Is the premise that Christianity and Judaism (European observances in particular) are not inerrant faiths accurate?

It is dangerous for anyone not of a faith to presume knowledge about it. I think we rightly get annoyed about this behavior when directed at Islam. We shouldn't be so hasty to do the same to other faiths. The issue of the Bible or Torah's inerrancy is, of course, rather more complicated than you paint it to be here in this piece.

The truth is that there is a rationalization process for inerrancy itself. How do muslims explain inerrancy in light of the caliph Omar's compilation of the "official" text? How do Christians justify the translation by King James? How does the Torah survive translation into written tradition from the oral? There are reasonable and rigorous answers to these questions posed from within each of these faiths. It is incumbent on you to make the effort to address the complexity of the issue from within the faith's internal perspective before attempting to draw sweeping generalizations about fundamental clashes of perspective.

Email ThisBlogThis!Share to TwitterShare to FacebookShare to Pinterest
Labels: Qur'an

There's an interesting summary article on "kosher" Islamic Banking over at American.com (a business online magazine with a strong pro-free-trade bent). They take a detailed, if skeptical, look at Islamic Banking and note the increasing trend of the major financial institutions to embrace variants of it. This quote from the opener:

Islam prohibits the payment of interest on loans, so observant Muslims require specialized alternative arrangements from their banks. Many of the largest global financial companies, including Deutsche Bank and JPMorgan Chase, have established thriving subsidiaries that strive to meet these requirements. As a result, optimists speculate that the common pursuit of lucre—divinely sanctioned, filthy, or otherwise—will bring bickering civilizations together. They may be right.

reminds me of Voltaire's famous quote:

Go into the London Stock Exchange - a more respectable place than many a court - and you will find representatives of all nations gathered there for the service of mankind. There the Jew, the Mohammedan and the Christian deal with each other as if of the same religion, and give the name of infidel only to those who go bankrupt. There the Presbyterian trusts the Anabaptist and the Anglican accepts the Quaker's promise. (via OPR, quoted in D. Boaz,  Libertarianism: a Primer, New York, Basic Books 1997, p. 38.)

May it be so again, inshallah.

Unsurprisingly, coming from a free-market platform (and non-muslim besides), the article has a cynical tinge as to whether the Islamic aspect of Islamic banking is genuinely viable:

What the “Islamic” label might mean is left to the beholder. The sharia scholars make it their business to pronounce only upon the letter of the law. Like legal practitioners everywhere, they focus on the technicalities. The spirit, being intangible, tends not to cloud their rulings. The leading critics of this inconsistency are political Islamists themselves. Majed Jarrar, a personable young man who studies electrical engineering, wears a long beard, and is keen to discuss his faith, recently opened an account with FIBE here in Cairo, only to let it sit empty. He’s been investigating whether “it’s actually Islamic or not,” and he doesn’t like what he’s finding.

When I asked him about the sort of innovation that, for example, Hussein Hassan at Deutsche Bank is involved in, Majed scoffed. Recalling a similar campaign by a Gulf-based Islamic financial house (“creative Islamic Solutions” was the slogan), Majed argued that sharia law is less about innovation than it is about a return to the ways of seventh-century Arabia.

Despite the zeal of purists like Jarrar, an entire banking sector without debt would be far too unstable. Such a system has never had to exist—medieval Islam had extensive regulations governing trade relations and individual contract law, but there was no banking, so there were no banking rules.

Fair enough, but where there is a will there is a way; and I think that we are seeing the infancy of modern Islamic banking, not its peak. It's perfectly reasonable for halal banking to start out resembling the interest-driven systems it seeks to compete with, but the expectation is that it will in time evolve in a divergent fashion, compatible with its distinct principles. As more and more money enters the halal system, it will begin to amass the leverage to write its own rules.

...there’s something reassuring about the way that the rational profit motive trumps strict ideology. The willingness to put profit first is, it turns out, the real shared value that links Islamic and Western civilizations.

True. But no one said that there was only one path to profit. Strict ideology might not be up to the task, but the optimist in me believes that ideology and profit motives alike are compatible in the long run.

Email ThisBlogThis!Share to TwitterShare to FacebookShare to Pinterest
Labels: halal

The veil of the Jafi

I have genuine respect for several of the editors at RedState, including streiff, Thomas, and Moe. I try to avoid commenting there in general because of that respect; it's sad, but true, that RS has devolved into a parlor house for partisan nonsense and - frankly - adolescent jibes. For example, plastered all over RS of late are photos of Nancy Pelosi wearing a headscarf during her visit to Syria.

I'm not going to get into the numerous ways in which their obsession with this reveals a lurking xenophobia (and I call xenophobia where I see it, on the right and on the left). I will however respond by simply showing some photos off the White House website of Laura Bush. 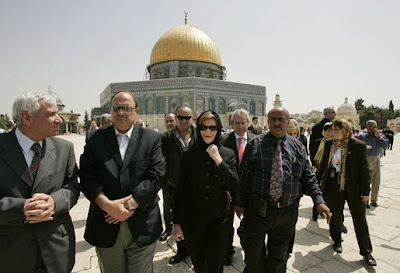 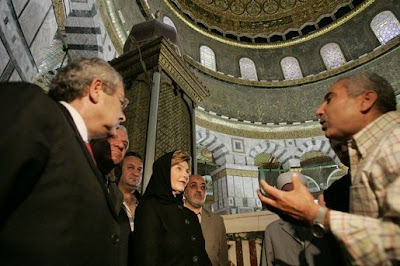 That should be sufficient to induce shame, though I know that it won't be. They are truly shameless of late.

In far too many circles, mockery has taken the place of serious analysis, even for this most serious of subjects and topics. At some point, there stops being a reason to indulge that mockery any further by responding to it and affording it legitimacy in the process.

I agree fully. That's largely why I have stopped posting at RedState, in fact - because part from a few voices like Pejman, mockery-as-analysis is RedState's stock in trade.
Posted by Aziz P. at 4/04/2007 04:38:00 PM No comments:

As my regular readers know, I am a member of the Dawoodi Bohra muslim community (specifically, an Ismaili sect with Shi'a Islam). Our masjid in Katy, Texas has stood there for over ten years.

Last night, drunken vandals smashed almost a dozen windows and a glass door on the madrasah building of our complex. I uploaded the photos to Flickr this morning. 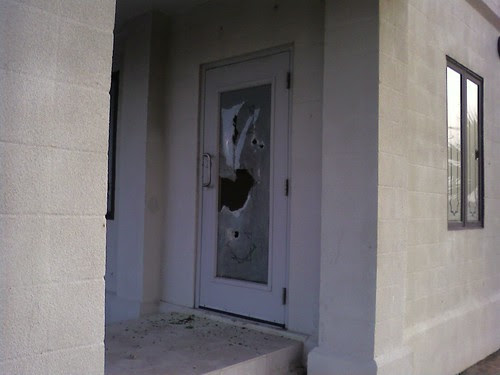 These windows are all to classrooms where the children are taught each saturday morning. As these are custom engraved windows with geometric designs, they probably won't be replaced in time for next week's classes, so the kids are going to have to see this.