Abuse of the Qur'an

With respect to the Newsweek/toilet/Qur'an debacle, I have no dog in this fight - as a muslim, I don't see how flushing the Qur'an down a toilet in any way disrespects the faith; rather it speaks of a almost deperate desire to deny it. Such an action reveals as much about the hollowness of the actors' faith as the audience of a Jack Chick tract.

Likewise, rioting because one thinks that the Qur'an needs to be "saved" from America only reveals profound ignorance about the timelessness of the book itself - and its transcendent status in our material world.

However, with respect to Newsweek, a magazine that I stopped reading in 1998, I think that arguing that the single disputed factoid about flushing the Qur'an is somehow responsible for American deaths requires proof of cause and effect.

Since there have been numerous reports of abuse of the Qur'an well before Newsweek's report, with no such riots, I think that evidence for the causal relationship is weak. Here are previously published media reports of Qur'an desecration that did not to my knowledge result in widespread rioting:

Lawyers allege abuse of 12 at Guantanamo

Some detainees complained of religious humiliation, saying guards had defaced their copies of the Koran and, in one case, had thrown it in a toilet, said Kristine Huskey [an attorney in Washington, D.C.], who interviewed clients late last month. Others said that pills were hidden in their food and that people came to their cells claiming to be their attorneys, to gain information.

"All have been physically abused, and, however you define the term, the treatment of these men crossed the line," [attorney Tom] Wilner said. "There was torture, make no mistake about it." ...

72.They were never given prayer mats and initially they didn't get a Koran. When the Korans were provided, they were kicked and thrown about by the guards and on occasion thrown in the buckets used for the toilets. This kept happening. When it happened it was always said to be an accident but it was a recurrent theme.

74. Asif says that `it was impossible to pray because initially we did not know the direction to pray, but also given that we couldn't move and the harassment from the guards, it was simply not feasible. The behaviour of the guards towards our religious practices as well as the Koran was also, in my view, designed to cause us as much distress as possible. They would kick the Koran, throw it into the toilet and generally disrespect it. It is clear to me that the conditions in our cells and our general treatment were designed by the officers in charge of the interrogation process to "soften us up"'.

The disrespect of the Koran by guards at Camp X-Ray was one of the factors prompting a hunger strike. Ibid., para. 111-117.

Investigators know the basic facts: In this poor and isolated nation with no lack of extremists, a young preacher named Ahmed Ali Jarallah assembled a small cell of militants to strike the enemies of Islam in Yemen. Two years ago, he read off a hate list in a speech at a mosque here, singling out specifically a hospital run by American Baptists.

"In Jibla, there is the Baptist hospital, which is the source of Christian activities in the province," Mr. Jarallah said. Muslims converted to Christianity at this hospital, he charged, and even "stuff the Holy Koran into toilets of mosques."

On Dec. 28, anger went into action: Mr. Jarallah himself assassinated a leading secular politician, Jarallah Omar, according to the police. Two days later, one of Mr. Jarallah's followers, Abed Abdel Razzak Kamel, is said to have killed three Americans in the hospital, which provided medical care in the southern town of Jibla for 35 years.

One of the men, Timur Ishmuratov of Tatarstan, told ORT on 24 June -- prior to the release -- that he had been captured by Northern Alliance forces shortly after the beginning of the U.S. military action in Afghanistan and "sold" to the Americans for $ 3,000-$ 5,000. Former prisoner Airat Vakhitov told ORT about alleged mistreatment while he was at Guantanamo. "They tore the Koran to pieces in front of us, threw it into the toilet," Vakhitov said. "When people were praying, they forced their way in and put their feet on people's heads and beat them."

Note that these reports of flushed Qur'ans in toilets have been reprinted in The New York Times, The Washington Post, The Financial Times, The Independent (London), The Daily News (New York), The Denver Post, The Hartford Courant, and broadcast on CNN.

If you accept that the causual relationship alleged by the RighteousSphere is in fact weak, then you might conclude (as I have) that Newsweek or no Newsweek, the muharib involved would surely have found a different excuse to launch their harabah. 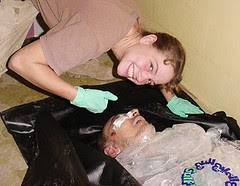 The real reason for the damage to (as White House press secretary Scott McClellan put it) "the image of the United States abroad" is because of the human rights abuses at Abu Ghraib. Arguing that it's all about Newsweek is just a deflection. Given that there still hasn't been real justice for those abuses - including the actual deaths of prisoners in US custody - it's not surprising that some still doubt our intentions. But do those who are suddenly so concerned about our "image" even remember Abu Ghraib? I assure you that the average Arab does. The causal connection is a lot stronger, but somehow I think the righteousness will cool when set upon this pathway of investigation.

As for the contention that this single line of newsprint undid years of post-war progress in Afghanistan, well if thats true it only reveals how poor that postwar planning was to begin with, and how tenous our victory was indeed. Given that Mullah Omar and Osama bin Laden still walk free, anyone arguing that we suceeded with respect to avenging 9-11 has a large burden of proof deficit indeed.

(By the way - Newsweek did NOT "retract" the anecdote about the Qur'an being flushed. They clarify:

"On Saturday, Isikoff spoke to his original source, the senior government official, who said that he clearly recalled reading investigative reports about mishandling the Qur'an, including a toilet incident. But the official, still speaking anonymously, could no longer be sure that these concerns had surfaced in the SouthCom report."

Pretending that the Qur'an has never been desecrated by American forces as an intimidation tactic is therefore a dishonest argument. Is the outrage by the RighteousSphere because Newsweek was wrong about eth fact (which it wasn't) or that it reported the fact? If the latter, that speaks volumes...)